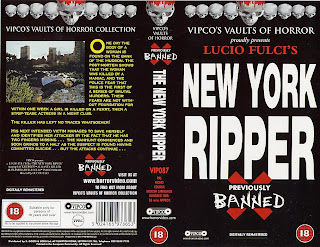 
This tape was the first ever UK release of Fulci's savage giallo - previously the film had been rejected by the BBFC who allegedly had the print sent back to Italy via police escort! Unsurprisingly, the BBFC insisted on 22 seconds of cuts to the murder of Kitty, the prostitute before they would allow it to be released. It was only released on VHS because, according to the IMDB, certain retailers refused to stock it. I don't know how true that is but I find it a little weird that they wouldn't take the DVD but had no problem with VHS (VHS was still the top renting format in 2002). I assume the tape was only ever available for rental as every release I've come across has been in one of those oversized rental cases.

Looking at the print it's a blessing that it didn't get a dvd release as it's really poor. It's brutally cropped to full frame without pan & scanning, and has a weird greenish tint. Audio is fine if a bit crackly. Of course the film is now available in the UK (Still cut though) on dvd and Blu-ray (!). 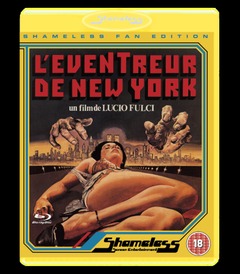